Two Emergency Ambulance Service paramedics and two dedicated St John Guernsey volunteers have been invested into the Most Venerable Order of the Hospital of St John of Jerusalem.

Volunteers Josie Guille and Liz Johnson were also invested as Members of the Order at the ceremony which took place at the Priory Church of St John in Clerkenwell and was conducted by The Prior of St John, Surgeon Rear Admiral Lionel Jarvis CBE KStJ DL. 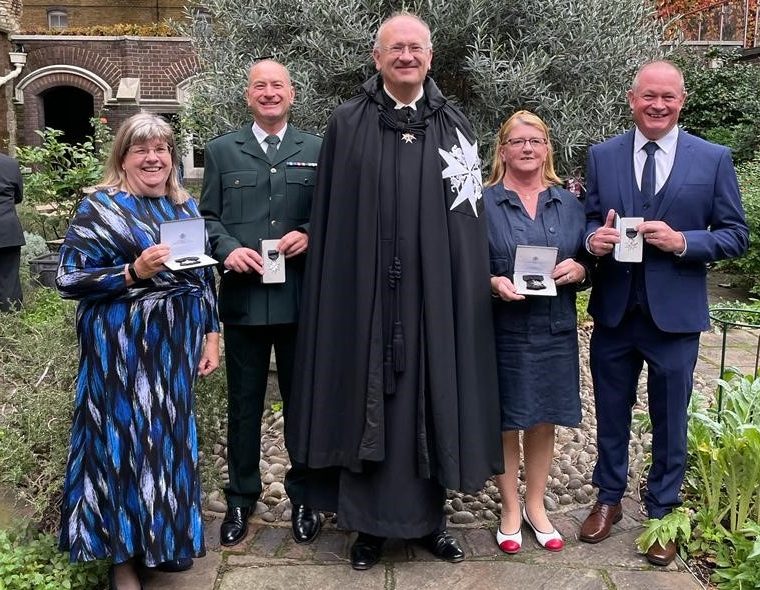 Andy Adam who has been a St John member since childhood and represented the island in national first aid competitions before joining the professional ambulance service said: “I feel honoured and proud to be have been invested as an Officer of the Order of St John. It is thanks to St John that I developed a passion for helping people from a young age and I am lucky to have had such an interesting and diverse career with the ambulance service.”

Andy is an operational paramedic and Station Officer with the Emergency Ambulance Service. He also oversees the Volunteer Ambulance Reserves and is responsible for major incident training.

Graham Le Maitre, who also joined St John Juniors as a child and went on to teach thousands of islanders first aid, added: “I remember the surprise when I received the letter and finding out that I had been invited to become a member of the Order. The event in London was a really nice occasion, steeped in history and a very proud moment for me and I was delighted to share it with Andy and the others.”

Youth leader Liz Johnson, who only offered to ‘help out for a few weeks’ fifteen years ago admitted being surprised when she first heard about the honour. Liz said the ceremony was a memorable occasion: “I was honoured and humbled to receive the appointment. It was a very special day for everyone involved.  The investiture took place in the beautiful Priory Church of St John and was a very moving occasion with awards bestowed on so many St John people from all walks of life.”

Former Head of Youth and Divisional Superintendent Josie Guille said: “It was a really nice ceremony to be part of and it was a pleasure to attend and see St John members from Guernsey as well as those from the UK, receive their recognition of service to St John. I have put in a lot of hours over the years, but the reward has been seeing the young people progress through Badgers and Cadets and often onto carers in medicine or other caring professions.”

Josie is still an active member of the Volunteer Ambulance Reserve and volunteer first aider.

The St John Guernsey members were accompanied at the ceremony in London by Andrew Henton, Knight Commander of the Bailiwick of Guernsey and Chief Ambulance Officer Mark Mapp. 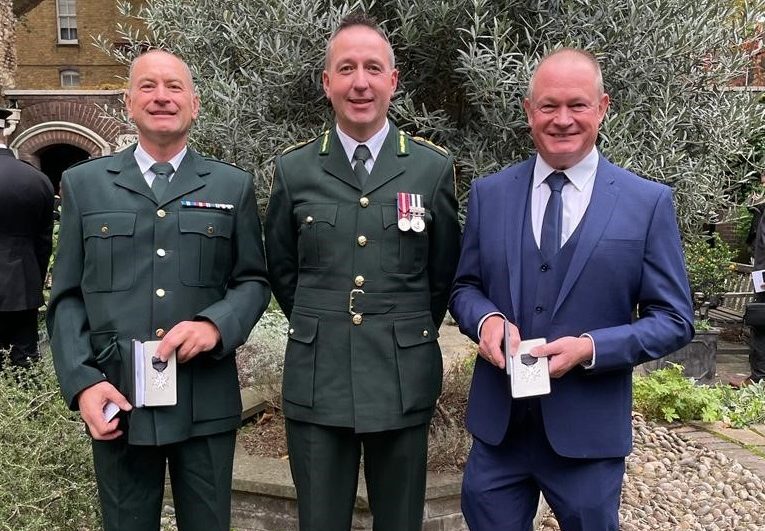 Mr Mapp said: “It was a proud moment and a real honour to witness Andy, Graham, Liz and Josie being invested into the Order of St John. They have all given a huge part their lives to the service of our community. Josie and Liz have dedicated hours of unpaid voluntary service to the charity through their youth work and first aid duties. From their early days as Cadets to successful careers with the Emergency Ambulance Service Andy and Graham have both been great assets to St John.”

The Most Venerable Order of the Hospital of St John of Jerusalem – commonly known as the Order of St John – has its roots in a hospice in Jerusalem in the 11th century. Today the international charity provides health care and support in more than forty countries through a dedicated team of around 250,000 volunteers and staff.

An individual can be admitted to the Order for outstanding service to St John in recognition of achievement, notable or selfless service or inspiration and encouragement to others. There are five Grades of membership Member, Officer, Commander, Knight or Dame and Bailiff or Dame Grand Cross.

The ceremony took place at the Priory Church of St John in Clerkenwell, London on 27th October.