A new group of community first responders (CFRs) based on Herm has completed an advanced first aid qualification.

A team of five volunteers from the island undertook a 30 hour course as part of their ongoing training as CFRs. To complete the qualification the team visited Guernsey last month for a series of written and practical tests led by St John Ambulance and Rescue Service paramedics.

A CFR is someone who makes themselves available to be dispatched by the Joint Emergency Services Control Centre to attend a potentially life-threatening emergency. They are trained as a minimum in Basic Life Support and the use of a defibrillator. First Responders are alerted by the Joint Emergency Services Control Centre at the same time as an ambulance is deployed and as they are already in the community they can often get to the casualty first.

The ‘First Person on Scene’ course is an advanced first aid qualification which equips volunteers to provide life support during medical emergencies – in this instance until the arrival of the marine ambulance, Flying Christine III.

The Chief Officer of the St John Ambulance & Rescue Service, Jon Beausire, said: “There is no resident doctor in Herm meaning volunteers provide an essential service for visitors and guests staying on the island and this course ensures they have the highest quality first aid training. The immediate response and expertise of the volunteers significantly increases the survival chances of those suffering injury or serious illness on the island.”

The responders were trained in the use of ventilation support, triage, and defibrillation as well as in the initial care of conditions such as brain injury, stroke, heart attack and hemorrhage. 10 responders received a refresher course having achieved the qualification for the first time in 2010. All 15 of Herm’s first CFRs were given additional training in skills such as the application of cervical collars and Entonox administration, a pain relieving gas.

Brett Moore is one of the volunteers who took the course for the second time. In addition to his role as CFR, Mr Moore is Herm’s head gardener, a member of the Herm Island Fire Service and a special constable.

“We rely on our island residents volunteering to provide this invaluable service for our visitors and they have to deal with some very challenging situations. Helping people as a CFR is a very rewarding experience, especially in a small island like Herm where it takes an ambulance crew longer to reach us than in Guernsey”, said Mr Moore.

The island’s CFRs carry mobile phones when ‘on call’ to ensure they provide an immediate response to emergency calls day and night for the many thousands of visitors to Herm each year.

In 2014, the Flying Christine III undertook twenty one visits to Herm to transfer patients for further medical treatment in Guernsey. The St John marine ambulance is crewed by qualified local volunteer mariners supported by paramedics and emergency medical technicians, meaning that treatment can commence as soon as a patient is on board. The service is funded by public donations and supported by marine ambulance subscription scheme. 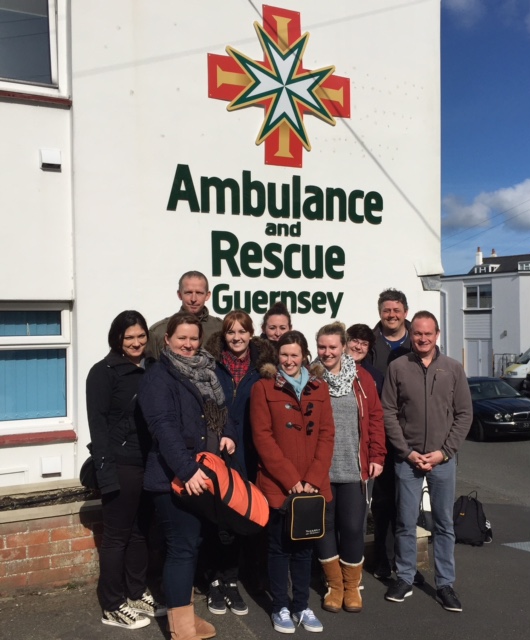