In forty-five years of being involved with St John, Dave Garnham has never donned a St John uniform, but despite that he has been a dedicated supporter of the charity in Guernsey.

Most recently Dave has acted as the caretaker and maintenance man, looking after the St John training hall and offices of the charity on the Rohais site. He is about to retire from that role at the end of the month, after thirteen years in the position.

Dave first got involved with St John when his daughter joined the junior section of the charity. “I was soon asked if I would help out doing bits and pieces,” he said. After a little while someone suggested he join St John and become a uniformed member of the organisation, but Dave wasn’t keen. “I worked at the harbour for Sealink at the time, so I had to wear a uniform for work. Somedays we would start at half past five in the morning and still be at the harbour at half eight in the evening, so when I go home that last thing I wanted was to get into another uniform,” he explained.

As his children, and then his wife got more involved with the youth sections of St John, so did Dave, putting his practical skills to good use. “I was always happy to help and do bits and pieces. I ran a handyman course for the cadets and then they asked me to make floats for the Liberation Day cavalcade and Battle of Flowers. That was a good bit of fun.”

Dave says some of his happiest memories were of the cadet camps. “At one time we would take forty to fifty people away to England and we had a few trips to France as well. It was a laugh loading the tents and the equipment into a big container. After the first year I suggested we get a low loader trailer to make it easier.”

Dave was well known for finding cheap and simple solutions to problems on the campsite. One year he managed to source for redundant packing crates, which could be used to carry equipment and then be used as a cupboard on camp. This meant the two days it used to take setting-up the campsite, could be reduced to  two hours. He was also renowned for building things. “They would think of something and I would do it. I built scramble nets and zip wires for the youngsters, but that was before all the rules and regulations came in, which took some of the enjoyment away.” he said. 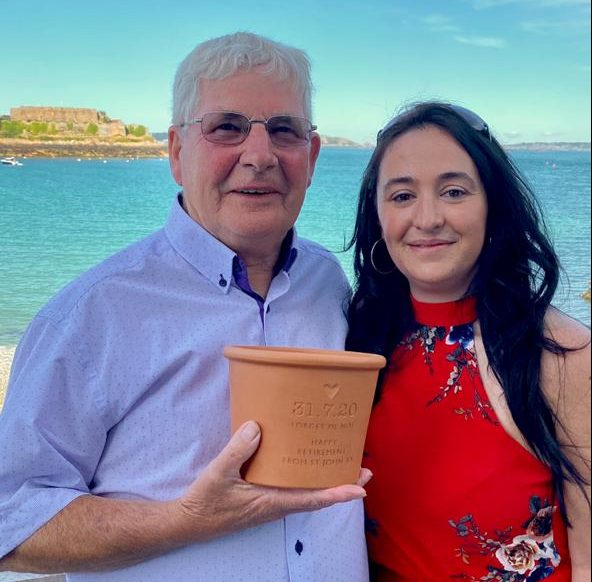 Chief Executive Officer, Nikki Harrison said “Dave has been a great asset to St John. His ability to turn his hand to anything made Dave a great caretaker for the buildings at the Rohais. Living on site Dave was on call seven days a week and was always happy to help anyone using the site. I’d like to thank him for all his years of service and wish him a happy retirement.”

Both of Dave’s daughters and his granddaughter have all been involved with St John over the years, representing Guernsey is competitions in the UK. Dave will remain a member of the St John Fellowship and is looking forward to spending more time looking after his grandchildren’s chicken and his daughters dog.