A group of senior island businessmen, all aged in their 60s or 70s, is taking on the challenge of running the Guernsey Marathon in 2023 to raise vital funds for the youth sections of St John Ambulance Guernsey and to promote the benefits of healthy living and ageing well. 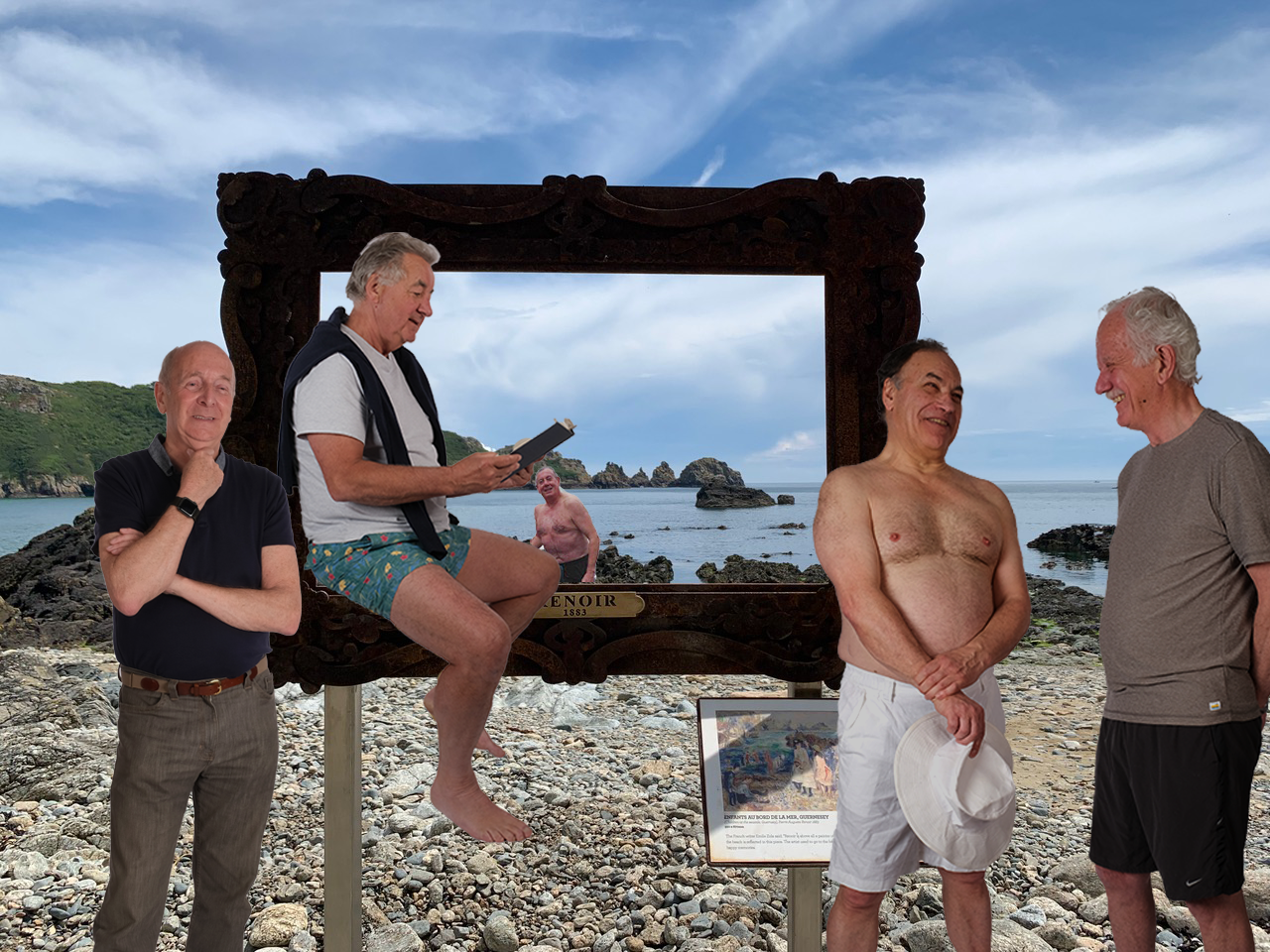 To kick off the fundraising, some of the group took part in a Moulin Huet photoshoot, famous for its links to another Old Master, Renoir.

The runners plan to complete next year’s marathon as a relay, each covering just over 5 miles each. The ‘Old Masters’ are being coached by Stuart Hardie, a veteran marathon runner who completed 40 marathons in 40 days in 2011.

John Hollis who is behind the initiative said: “St John Ambulance Guernsey provides a youth programme for children from the age of 5 to 18, starting with Badger Cubs and Badgers, then St John Cadets. The youth programme helps young people build their confidence, develop a range of personal skills, such as teamwork, communication and leadership, as well as teaching life saving first aid skills. A large number of St John Cadets go on to have successful careers in health and social care, both locally and in the UK.”

The team kit can carry up to seven corporate sponsors’ logos. In addition it is possible to “run with the team in name only”, because further personal or group names can be included in many small squares on the running shirts – add yourself or a name in memory. Replica shirts will also become available later in 2022 for any other age groups wishing to emulate this team for the same purpose.

Chief Minister Peter Ferbrache commented: “I know these public-minded gentlemen well. They tend to run towards public problems, not away from them. I wish them well with this generous run for Youth Services, for which I am sure they will be ably supported by the very capable St John Ambulance  paramedics and volunteers!”

Former Bailiff, Sir Richard Collas, added: “I also know them well and wonder if they might need a wing and a prayer to complete the Guernsey Marathon at their collective ages.”

Matthew Barrett, the St John Chaplain, advised: “I will be supplying a prayer before the start of the Marathon, but supplying angelic-like wings for that team is unfortunately well above my pay grade!”

Nico Bezuidenhout, Aurigny CEO, helpfully suggested: “We can supply some wings, but strapping them on might actually slow them down to an epic degree.”

Regular runner and CEO of Guernsey Water, Stephen Langlois, expressed his support: “Good hydration all the way round will be important to the team. We are delighted that they have opted for ‘Good Guernsey Water’ as the running drinking water supply of choice. But I guess they didn’t have much choice after two of their recent roles on the States Trading Supervisory Board.”

Nathan Long of Rothschild & Co explained: “Knowing the class and environmental credentials of these runners, they won’t be throwing plastic bottles around at handovers. They’re more likely to be toasting each other by raising a glass, pausing to debate how well the last leg has gone and how the next leg might go. We’ll be cheering them on in their efforts for this worthy cause.”

When asked if the resulting image of the Old Masters team through the Renoir frame could actually be considered “art”, two experts were initially lost for words. Art for Guernsey founder David Ummels pondered the question along with Tony Gallienne, former head of the Guernsey Arts Commission. “We can only say we think this falls into a totally new category of the term ‘art’ in Guernsey or anywhere,” they eventually concluded. “Maybe even iconic…..”

Award-winning media celebrity and organiser of Guernsey’s Sea Swimmers, Min Henry, was also present with her supportive ‘husband of Min.’ Min offered some helpful training advice to the team. “I suggest they come along to some of our sea swimming events and run in the shallow water like race-horses in training – we’ll make stallions of them yet!”

Mark Helyar, Treasury Minister within Policy & Resources, wished the team well. “I hope everyone supports them very generously with donations to their fundraising for such a good cause – the old helping the young next generation develop their skills for the future health of Guernsey. The team has undertaken a tough job to raise funds. Perhaps not as tough as mine to raise funds via GST, but a tough job nevertheless.”

Julian Winser, Chairman of the Guernsey Financial Services Commission, and a very occasional Marathon runner, noted. “There are only two types of runner – those who are injured and those who are waiting to be injured!”

Mark Mapp, St John’s Chief Ambulance Officer, provided reassurance to the Old Masters elderly team members: “Don’t worry, my team will be present on the day. We will be ready to pick up any odd bits that drop off you on the way around the 26 mile Marathon course.”

Guernsey’s Frailty Practitioner, a relatively new role funded jointly by Health & Social Care and St John, is Kelly Marquis of St John. She explained her presence. “Good active exercise builds strength and reduces the risk of falls – a major cause of injury and ambulance call-outs for our ageing population. I am pleased to see the intentions of this team to stay fit and active.”

Team member John Hollis said that the allocation of Relay legs had yet to be finalised. “But Stuart Falla will be running every inch of the East Coast final leg, often known as the “Glory Run to the Finish”,  due to Stuart’s recent involvement on a P&R Subcommittee addressing East Coast Regeneration.”

St John’s CEO, Heather Langlois, who is also responsible for St John’s Training Services and Youth Services,  is keen to test the capabilities of the Old Masters team via a performance test at the end of the summer, perhaps at La Valette. “We are thinking of performance-testing the Old Masters against my two Youth Services groups – the 5+ year old Badgers and the Cadets. I am sure that some of the Badgers will give them some good advice afterwards.”

A final word from the Old Masters team itself: “We are not expecting to beat the corporate teams and win the Marathon Relay. But with generous help from the community and donors, we may be able to help create tomorrow’s health and social care practitioners. And that would be a community win for everyone in Guernsey. So please donate generously. This is no April Fools Day joke.”

Anyone wishing to donate can do so online by going to the following link: https://giving.gg/donate/event/9138/Old-Masters-Marathon-Relay-2023-to-Support-St-John-Youth-Services

Alternatively, donations can be made at the St John Healthcare Shop at the Rohais Ambulance Station.