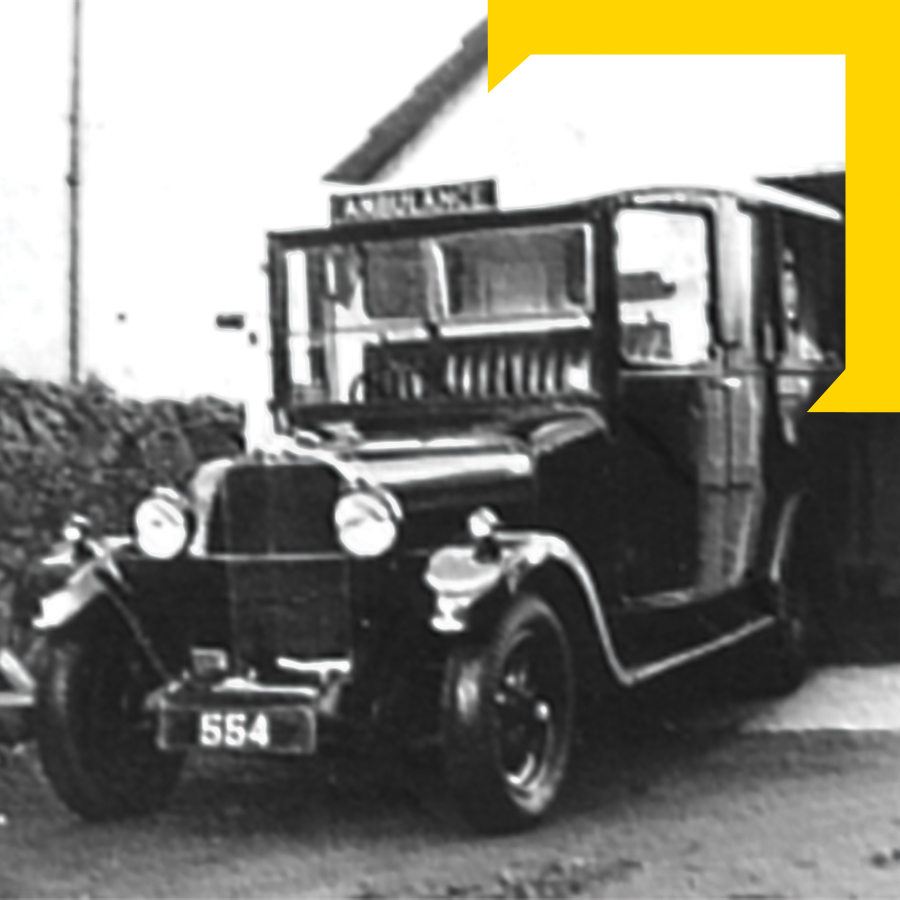 THE FORMATION OF ST JOHN AMBULANCE

IN THE BAILIWICK OF GUERNSEY

The first recorded activity of St John in Guernsey was in the early 1930s when Dr Robertson started teaching St John Ambulance Association first aid courses. This was followed by the establishment of the Guernsey Ambulance Division a brigade of uniformed volunteers to provide first aid services, and later caring, to the community. This was followed by the formation of the Guernsey Nursing, Ambulance Cadet and Nursing Cadet Divisions.

It is also known that St John trained nurses from Guernsey were also actively involved in caring for wounded soldiers during the Great War.

Meanwhile, at the turn of the century the States of Guernsey had a horse drawn cart which was used by the Town Hospital as the only means of transporting patients, however it didn’t carry any medical equipment and was operated by untrained staff. It wasn’t until the 1920s that the horse drawn vehicle was converted into a motorised ambulance.

The 1930s saw significant growth for St John with the establishment of the Guernsey Ambulance Division, a brigade of uniformed volunteers to provide first aid services.

Out of this developed the Transport Section, which was the predecessor of the St John Ambulance and Rescue Service, now Guernsey’s Emergency Ambulance Service.

Instrumental in establishing the ambulance service was Reg Blanchford, who as a 16-year-old was involved in a serious motorcycle collision that left him with life threatening injuries. Getting an ambulance in those days took considerable time, waiting for the part-time driver to be called and go to the Town Hospital to collect the vehicle before driving it to the scene, so while waiting for the ambulance Reg was picked up by a passing car and taken to a doctor who then sent him to the hospital. He underwent several operations in England and spent three years convalescing, during which he had time to think and reflect over and over again about the lack of a proper first aid treatment and fast reacting ambulance service for the island.

On his discharge from hospital Reg joined St John and started campaigning for a dedicated ambulance. After a few years of hard work and fundraising a second-hand Talbot ambulance was purchased from the UK and a voluntary contribution scheme was introduced to raise funds to maintain and run it.

At 5pm on the 2 June 1936 with a handful of volunteers, a second hand ambulance and as part of the old St John Ambulance Brigade Guernsey’s St John Ambulance & Rescue Service responded to its first casualty. From a shed on an old concrete works, and on the same site as the present day headquarters, the fledging ambulance service responded to emergency calls and requests to transport patients to hospital.

Three years later the Guernsey’s local government agreed to support the running costs of the new ambulance service with a grant amounting to £200. It disbanded the less efficient State-run service. In 1940 the Northern Ambulance Division was also established although it did not receive formal recognition by National St John Head Quarters until 1945 at the end of the Occupation. Soon after the start of the Second World War, the Channel Islands were occupied by German armed forces for what became a five year period, under Hitler’s occupation of Europe.

During that time the service continued and, despite severe restrictions on fuel, tyres, night-passes, volunteers and batteries, every emergency call was answered. At one point fuel was so scarce that ambulances had their engines removed and were drawn by horses.

Volunteer members from the divisions also continued to provide caring and first aid services, including helping with guarding and distribution of the Red Cross and St John food parcels arriving on board The Vega. 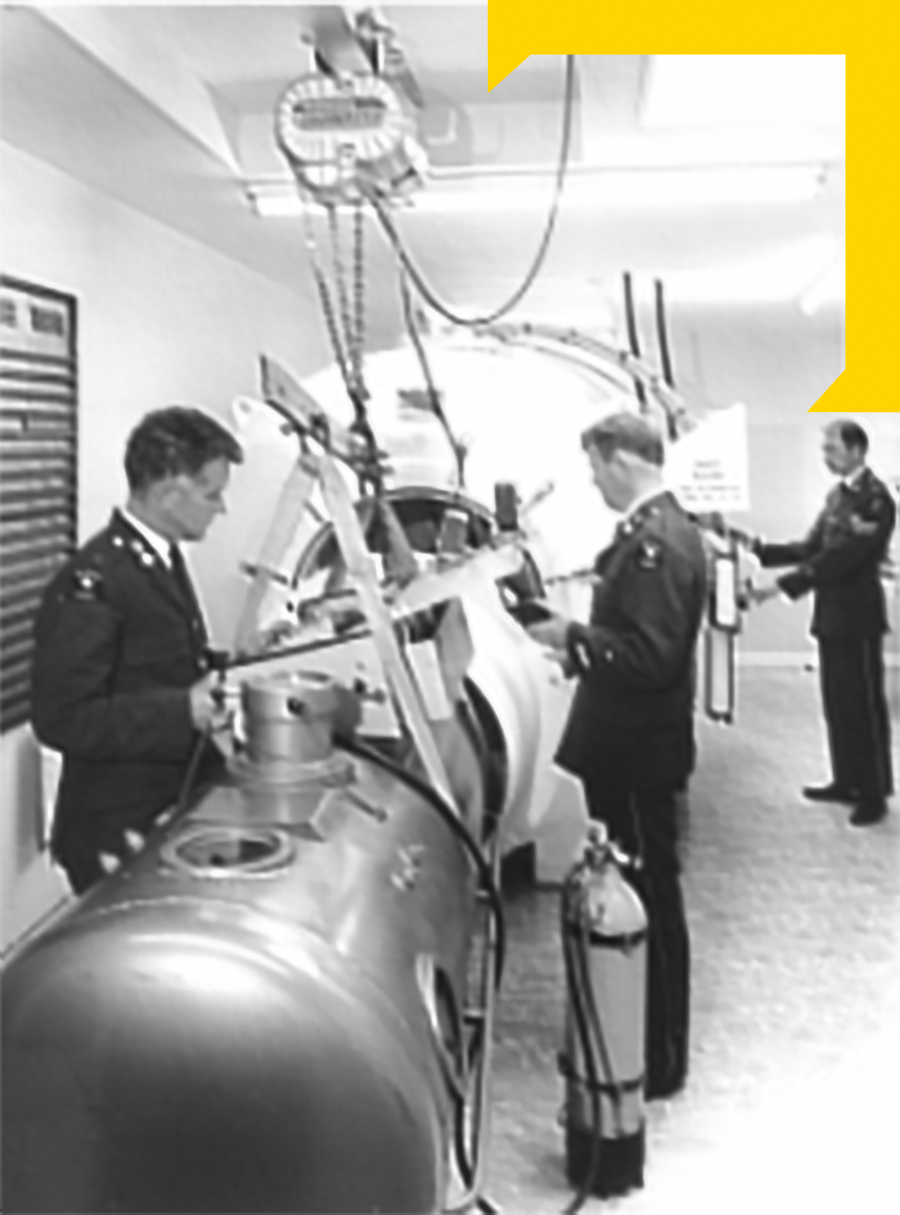 DEVELOPMENT OF THE GUERNSEY AMBULANCE

After the war the ambulance service grew and a headquarters and station were built, new ambulances were purchased and the volunteer ambulance crews were succeeded by permanent employees. It became the first ambulance service in the British Isles to install radio communications and, during the 1950s and 60s, it expanded its range of activities to include a marine ambulance, inshore rescue boats, a cliff rescue team and a recompression chamber.

The organisation was evolving into the only ambulance and rescue service in the British Isles, perhaps even the world.

During the 1970s, St John began hiring and selling medical equipment to patients recovering from illness and injury, and to those with disabilities and restricted mobility. This initiative has now become a purpose built centre for health care equipment – the largest of its kind in the Channel Islands. 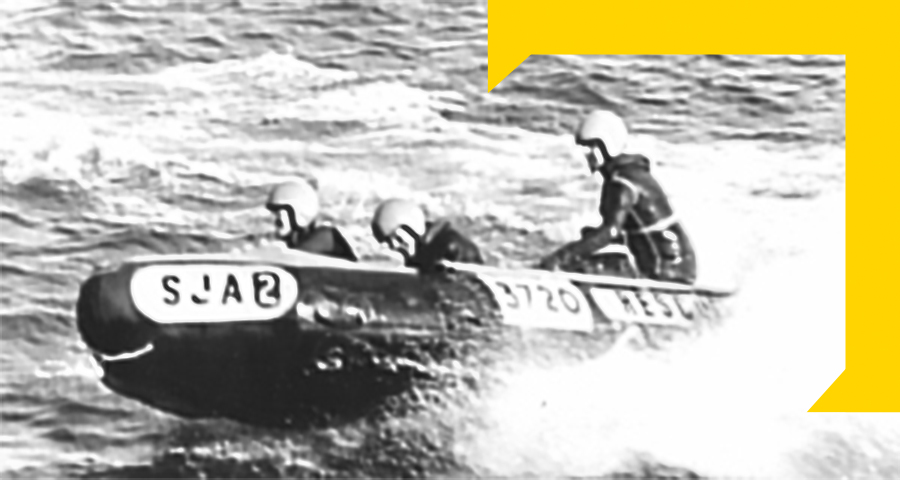 Following an inspection in 2014, Guernsey’s 40-year-old Hyperbaric Recompression Chamber was in need of expensive updating work and various tests to ensure that it was in a safe condition to undergo upgrading. St John decided not to upgrade or replace the facility. St John continues to respond to any diver who suffers decompression illness and transfers them to the A&E Department at Guernsey’s General Hospital for further assessment.

St John continues to provide the Emergency Ambulance Service for Guernsey, with a staff of around fifty people, including Paramedics, Emergency Medical Technicians and Emergency Care Assistants who respond to around 7,000 calls each year delivering pre-hospital medical assessment and treatment with a fleet of five frontline ambulance vehicles and three rapid response cars.

Following the Occupation volunteer divisions based at the Rohais headquarters and in St Sampsons grew with members taking an active role in providing first aid cover at public duties throughout the Bailiwick. Members met regularly to train in first aid and ‘home nursing’ using these skills in public duty, and within nursing homes, hospitals and the community. The Northern Divisions worked together to purchase and develop the training premises at Les Gigands at the site of an old sweet factory.

Working in a wooden hut in the back of her garden Divisional Superintendent Monica Scully established what has now become the St John Ambulance Care in the Community Library. The service initially supplied large print books and has developed to include digital formats. Members provide a delivery service for the elderly in the community, visiting regularly to provide books and also social interaction which is important in keeping the mind active in later life. The Library is now housed in purpose built facilities at the main Rohais site. In 2014 the library volunteers were awarded the Queens Award for Voluntary Service. 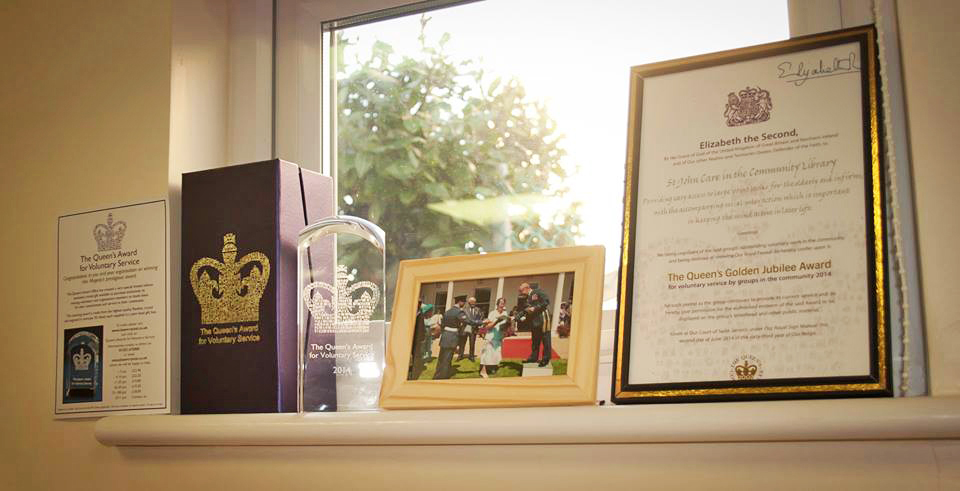 For many years training for, and participating in First Aid and Caring Competitions has been a popular method of developing and practising skills that could later be used in real-life situations. Teams are regularly seen returning to the island with trophies gained in interinsular, regional and national competitions. The late 1960s and early 70s saw a peak in this success with the Guernsey Nursing Cadet Division being the first Cadet Division to win National Finals on three consecutive years.

Retired members of St John recognised that they could still make a positive contribution to St John Ambulance activities and, in 1983, a ‘St John Fellowship Group’ was established in Guernsey. Members who previously held professional and/or volunteer roles in St John meet socially on a regular basis and also supply valuable support to their colleagues within the organisation.

In 1987 the first Badger ‘Setts’ were established in Guernsey. While the Cadet Divisions had previously had junior sections, this initiative saw the development of specific units for the five to ten-year-old members. They are led by their mascot ‘Bertie Badger’ and members are able to work towards the ‘Super Badger Award’.

There was gradual amalgamation of the volunteer divisions since their original formation and a major reorganisation led to the establishment of the current three divisions. Each meets once a week and includes adult, cadet and badger sections. The previous ‘Northern Divisions’ moved to the Rohais Headquarters site at the same time.

The Gigands building was then available for conversion to a dedicated training centre used as the base for public and community first aid and related courses. The centre was opened by Princess Anne. This saw the development of the training centre into ‘St John Training Services, Guernsey’ which is a joint venture between the Guernsey St John Ambulance and Rescue Service and St John Ambulance Guernsey. 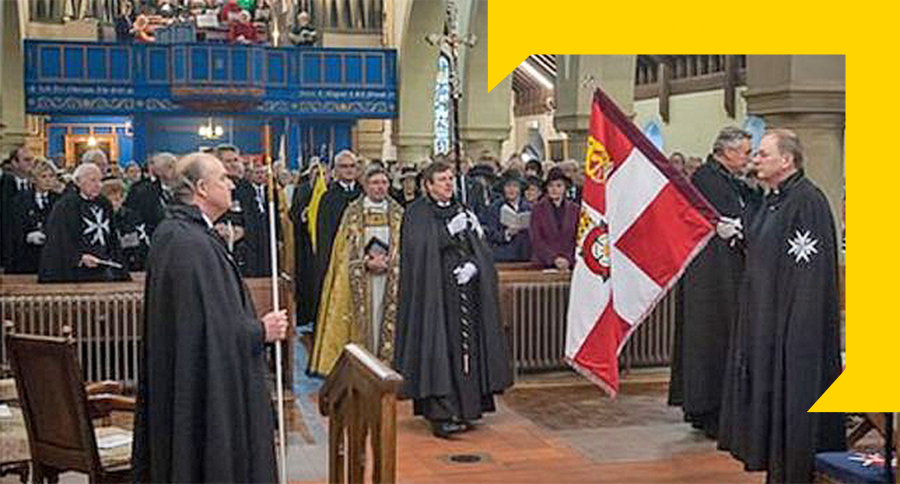 FORMATION OF A COMMANDERY

The beginning of an important new chapter for St John in the Bailiwick of Guernsey was marked in 2012 with a historic ceremony. The ceremony inaugurated the new Commandery of the Bailiwick of Guernsey of the Most Venerable Order of the Hospital of St John of Jerusalem and dedicated the new Commandery symbols – the Commandery Sword, Banner and Church Cross. The new Commandery became a self-governing body under the Order of St John and places local assets and finances under local control. It remains dependent on the Priory of England and the Islands in a manner similar to the Commanderies of Jersey and the Isle of Man. However this Commandery has a unique place in the worldwide Order of St John in the number and range of services it offers to the community.

The formation ceremony was conducted in the presence of His Royal Highness, The Duke of Gloucester KG GCVO, who is The Grand Prior of the Order of St John. The service that took place is steeped in history with elements dating back to the 1800’s when the order of chivalry was formally established. After the arrival of The Duke of Gloucester the ceremony started with a procession into the church by senior members of the order, dressed in ceremonial robes and carrying colourful banners and staffs.

All of St John’s activities in the Bailiwick of Guernsey now fall under the banner of the Commandery. They operate as separate companies but work together to provide a unique service to the community.