A 5-year-old boy has received a special award from Guernsey’s Chief Ambulance Officer after making a potentially life-saving 999 call when his mum collapsed at their home in September. Colby Bridgman, who is now 6, Colby, was accompanied by his mum and nanny, as he received the Chief Officer’s Commendation award from Mark Mapp at the Ambulance Station, on the Rohais.

During the 999 call Colby remained calm, providing the JESCC call-taker with vital information, including his name, address and postcode, as well as details of what had happened to his mum.  Colby can be heard saying “mummy fell and she can’t really breath properly….and is closing her eyes”. While the ambulance was dispatched Colby kept checking on his mum, then while the call-taker stayed on the line Colby was asked to get a neighbour for help. Later in the call Colby can be heard saying “I can hear the ambulance.” The ambulance crew praised Colby, saying: “Colby was amazing. He was calm, helpful and so grown up at a time that must have been really frightening for him. Colby was able to answer all our questions, and provide us with lots of really valuable details which helped us to understand what had happened to his mum. He was so polite and kind and even gave us one of his special stones to thank us for looking after his mum. Well done Colby you’re an awesome young man.” Mr Mapp said: “Knowing what to do in an emergency is a life skill and that is why as the ambulance service — and as part of St John — we teach people of all ages what to do in a medical emergency and how to give life-saving first aid. One of the most important things is recognising that someone is unwell and calling 999 for help. And that is exactly what Colby did when his mum experienced a medical emergency. Because his family had spoken to him about how to call an ambulance and how to call 999 – Colby knew exactly what to do.

During the call, Colby remained calm and answered all the questions he was asked, which ensured an emergency ambulance was quickly dispatched to the house so his mum could get the care and treatment she needed.” Colby was also presented with a model of an emergency ambulance and given a tour of a real ambulance by the crew which attended the incident in September.

Colby’s mum Jess Payne says she doesn’t remember much about the evening, but she was full of praise for her son. “From what I’ve been told he was really amazing did everything he was asked and he was really brave. It is really good to make children aware of how to phone 999, particularly when no one else is around. It is so important and I’m so glad I did it.”

The JESCC call-taker Liz Arklie also received a Chief Officer’s Recognition of Performance Award for her calm and professional handling of the 999 call. 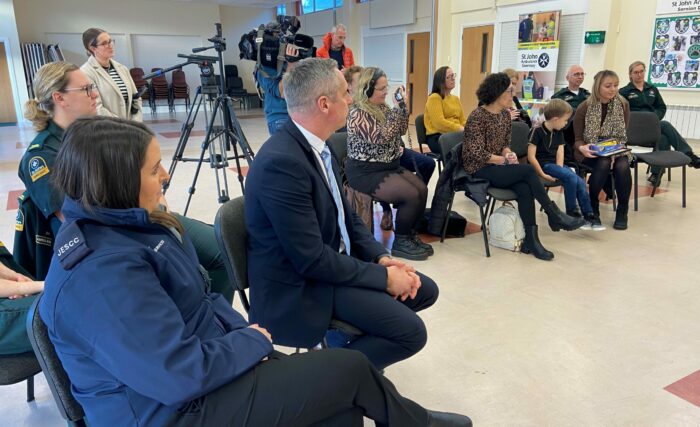