The St John Emergency Ambulance Service has taken delivery of two new ambulances in a ceremony that recreated the scenes of 84 years ago, when the St John Ambulance Brigade received a new ambulance. 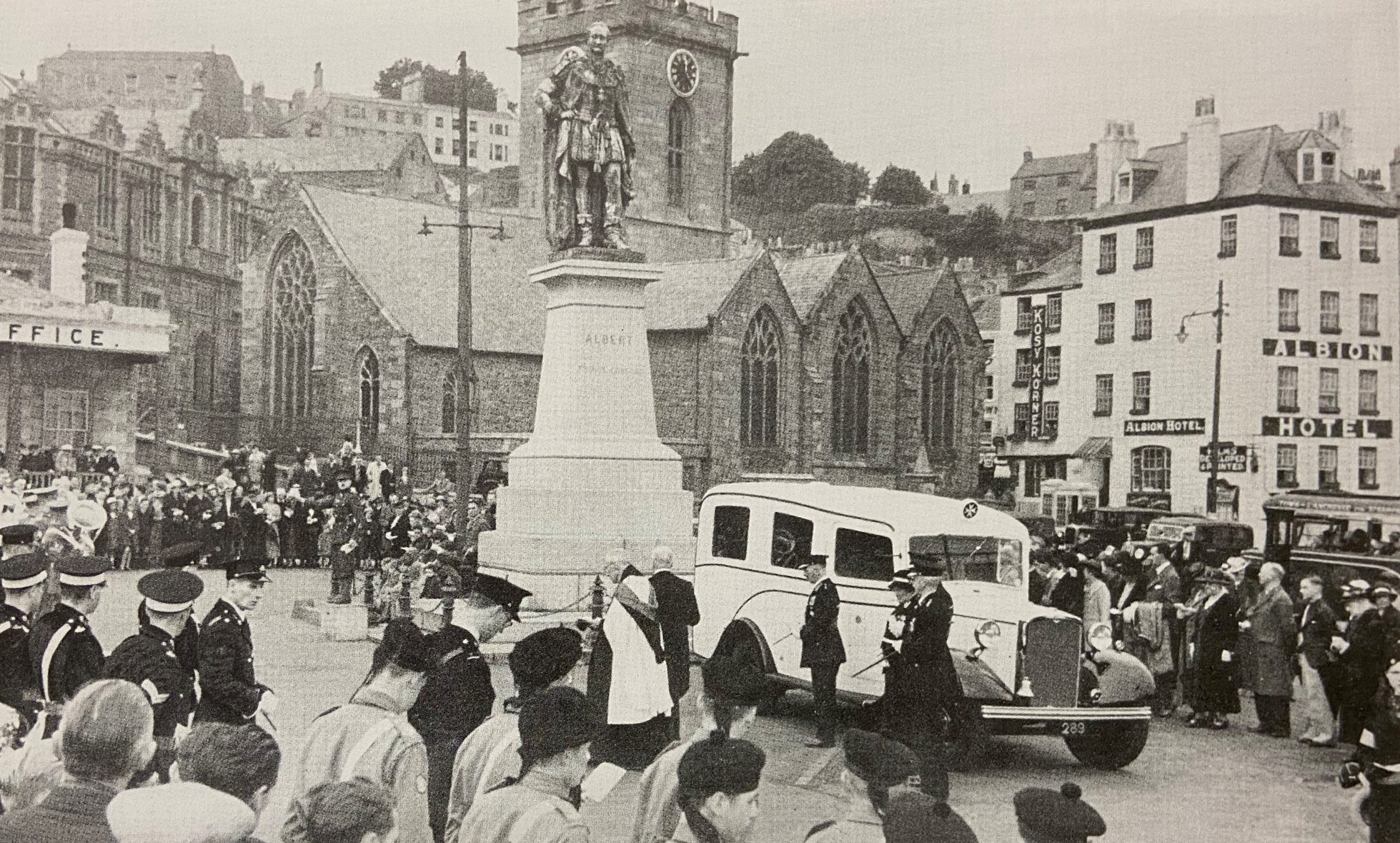 As the reprint of a Guernsey Press article from June 1937 illustrates, a dedication ceremony was held on the Albert Pier, where the Morris ambulance was handed over, by States officials, to St John which had taken on the responsibility of running the ambulance service for the island just a year before. 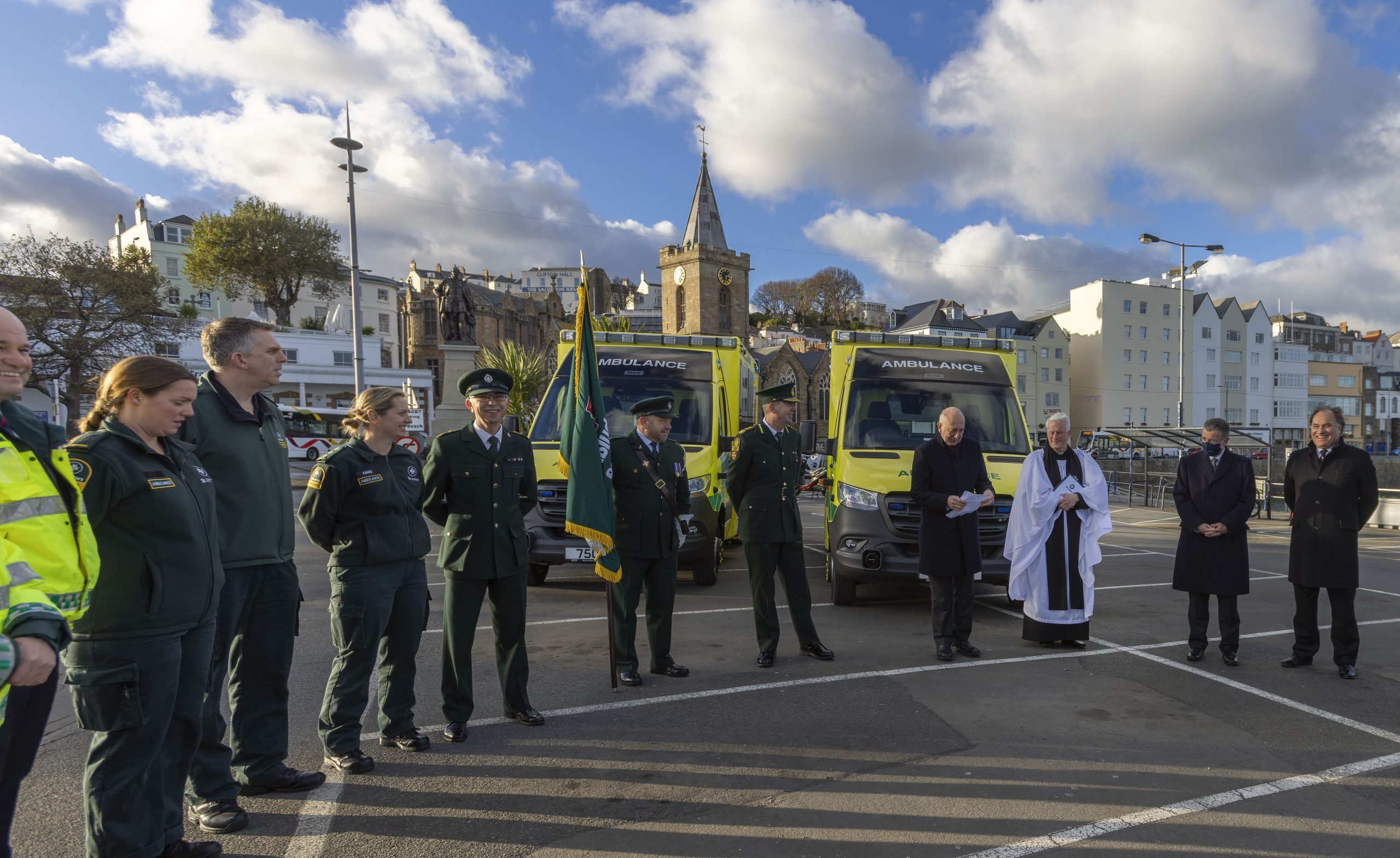 On Sunday the two, modern day, state-of-the-art ambulances were officially presented to St John by the States of Guernsey and were blessed by the Chaplain of St John Guernsey, in a similar event at virtually the same spot in St Peter Port.

The ceremony was attended by the Bailiff Richard McMahon, States of Guernsey representatives and senior officers and frontline staff from the Emergency Ambulance Service. A blessing was conducted by the new St John Chaplain the Revd Matthew Barrett. 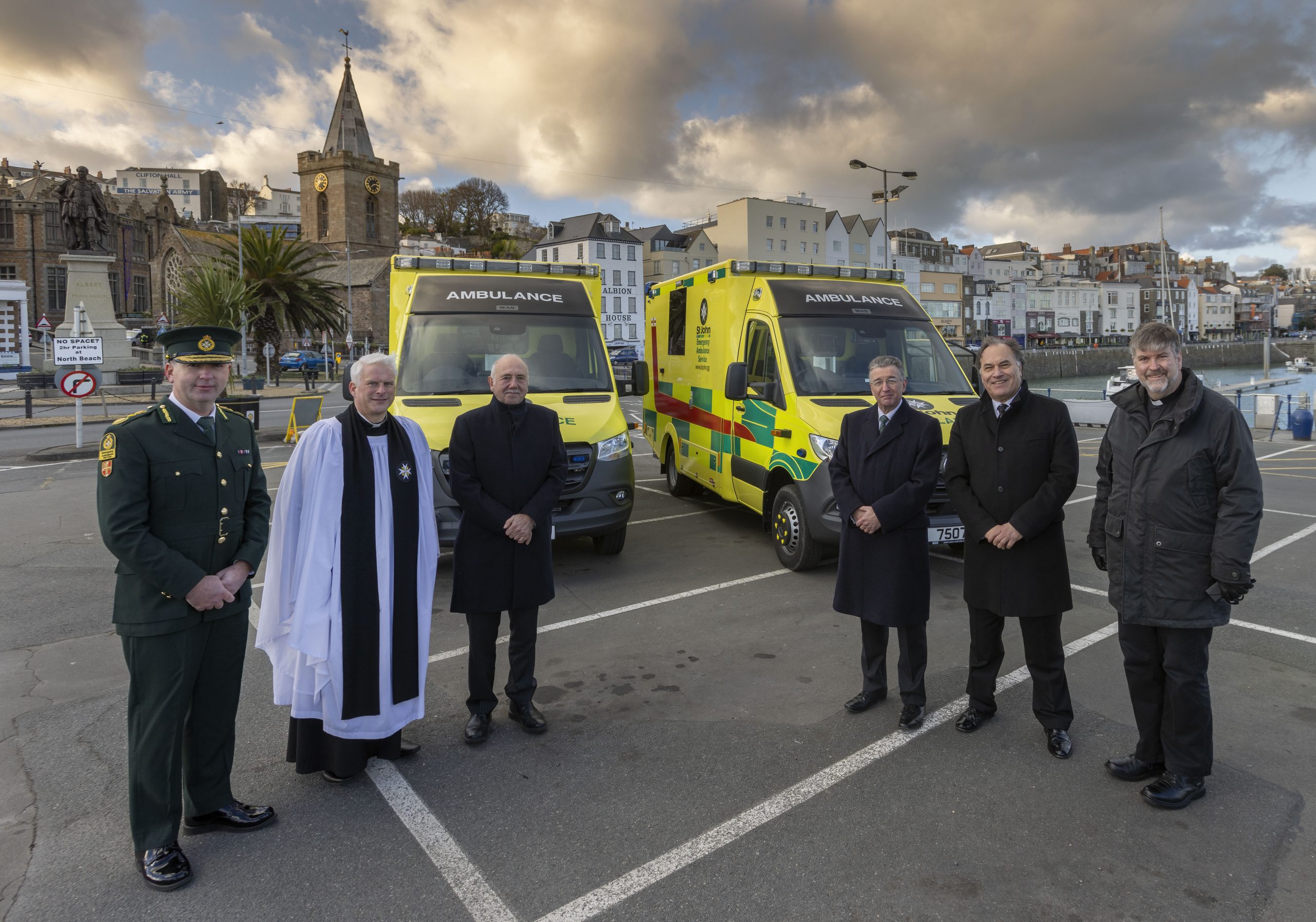 Mark Mapp, Guernsey’s Chief Ambulance Officer said: “The new vehicles are a physical example of the strength of our partnership, and I would like to thank the States of Guernsey and HSC committee who have worked together with us this project”.

Mr Mapp went on to thank Dave Welbourne, Stuart Brennan and Stuart Malley from the emergency ambulance service, St John Chairman John Hollis and Simon Steel from States for their work on the project.

“I am delighted and grateful to take delivery of two new emergency ambulances funded by the States of Guernsey. These two new ambulances replace two of our existing fleet which are now over 12 years old and which have now exceeded the practical lives as frontline ambulances with high demands we place on them.”

He added, “My colleagues and I at St John thank the States for their responsive procurement efforts, which have enabled this to happen more promptly than we had initially feared. These are specialist vehicles, somewhat narrower than standard international vehicles in order to better operate on Guernsey’s narrow roads. Delivery timescales can sometimes be prolonged, because these specialist versions are produced in Germany, generally in change-over gaps between longer production runs. However, with the assistance of the States, we have managed to secure delivery more promptly than usual.”

The new ambulances are fitted with state-of-the-art diagnostic and treatment equipment which allows clinicians to administer urgent and emergency pre-hospital care on scene at a patient’s home or by the roadside. The vehicles are designed to give maximum comfort for patients and a practical working environment for medical crews. 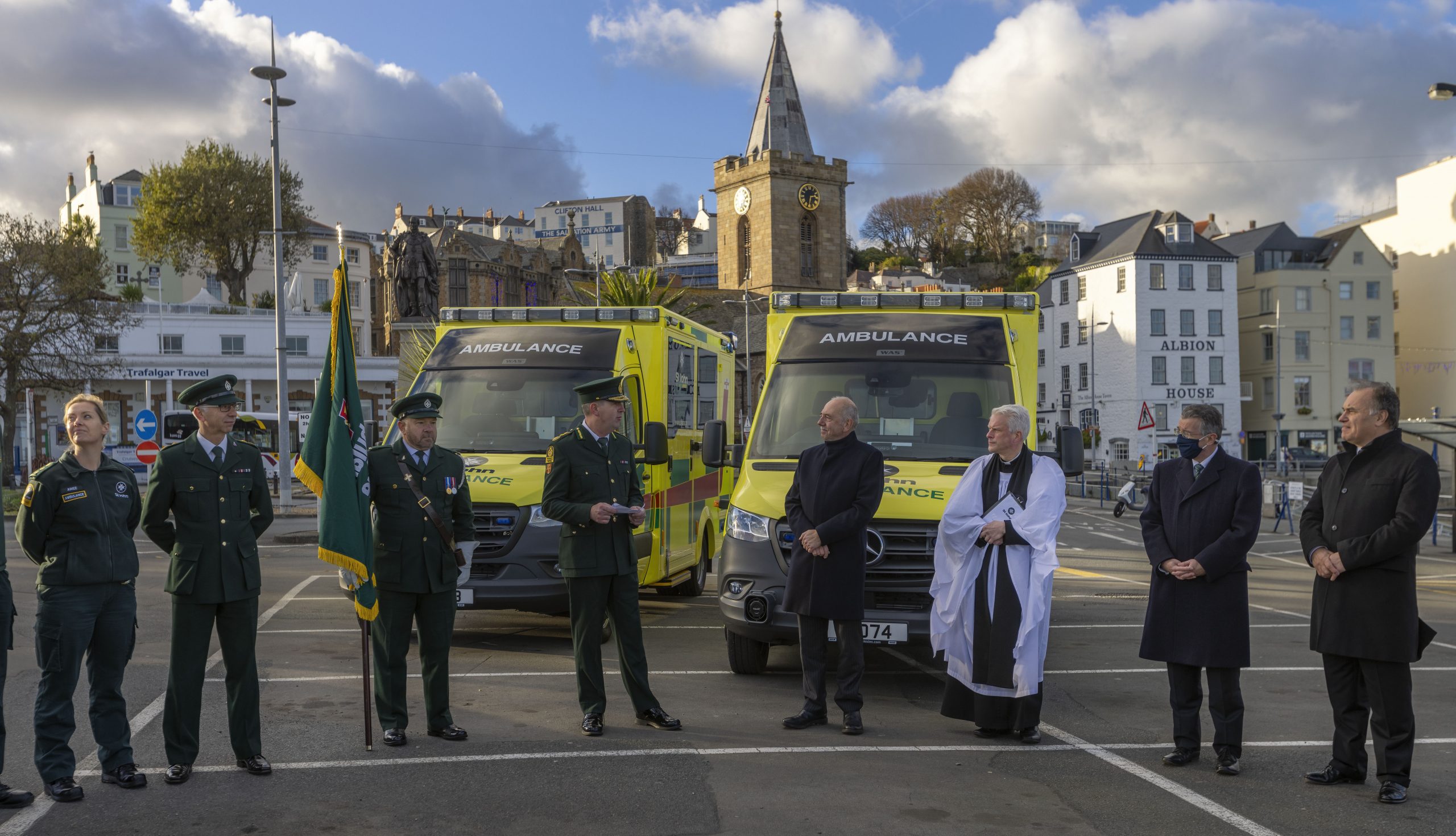 Under current arrangements, users of an Emergency Ambulance in Guernsey are charged a government-subsidised cost for call-outs and treatment by paramedics, and for conveyance to hospital. For 2022, the government-subsidised cost is £390. However, St John offers an annual subscription scheme which costs just £55 per adult and cover up to 50 emergency ambulance call-outs in that year. Full details of the subscription scheme are available at www.stjohn.gg

The States of Guernsey provides an annual grant to fund the balance of the costs of St John providing the Emergency Ambulance Service, subject to various operational performance indicators being met.

Deputy Al Brouard, President of Health & Social Care (HSC), was the senior politician present at the new ambulance handover ceremony. “As we are seeing in many jurisdictions, the funding of health and social care services is one of the most challenging issues for governments in our time. Difficult priorities have to be set as we aim to provide the full range of services needed by the community in the most cost-effective manner. St John is a key partner and I am pleased that we are able to invest to keep our services properly equipped for the demands they face.”

Mark de Garis, interim CEO of the States of Guernsey and former Chief Secretary for HSC said: “During 2018, HSC worked with a range of service providers to offer better coordination for the care islanders receive on a daily basis. Our joint aim was to provide new ways of working and solutions which address the core pressures of an ageing demographic, fewer working age tax payers, and the long-term inherent trend of above inflation healthcare cost increases which lead to real term impacts upon public expenditure unless positively addressed. Later that year, HSC and St John defined and agreed a future operating model for ‘Patient-intense Emergency Response’ and ambulance services over the following years and we continue to implement that model in a phased manner. As with many things, the arrival of Covid-19 delayed some initiatives, but we are grateful for the responsiveness of all parts of the St John operation during the pandemic.” 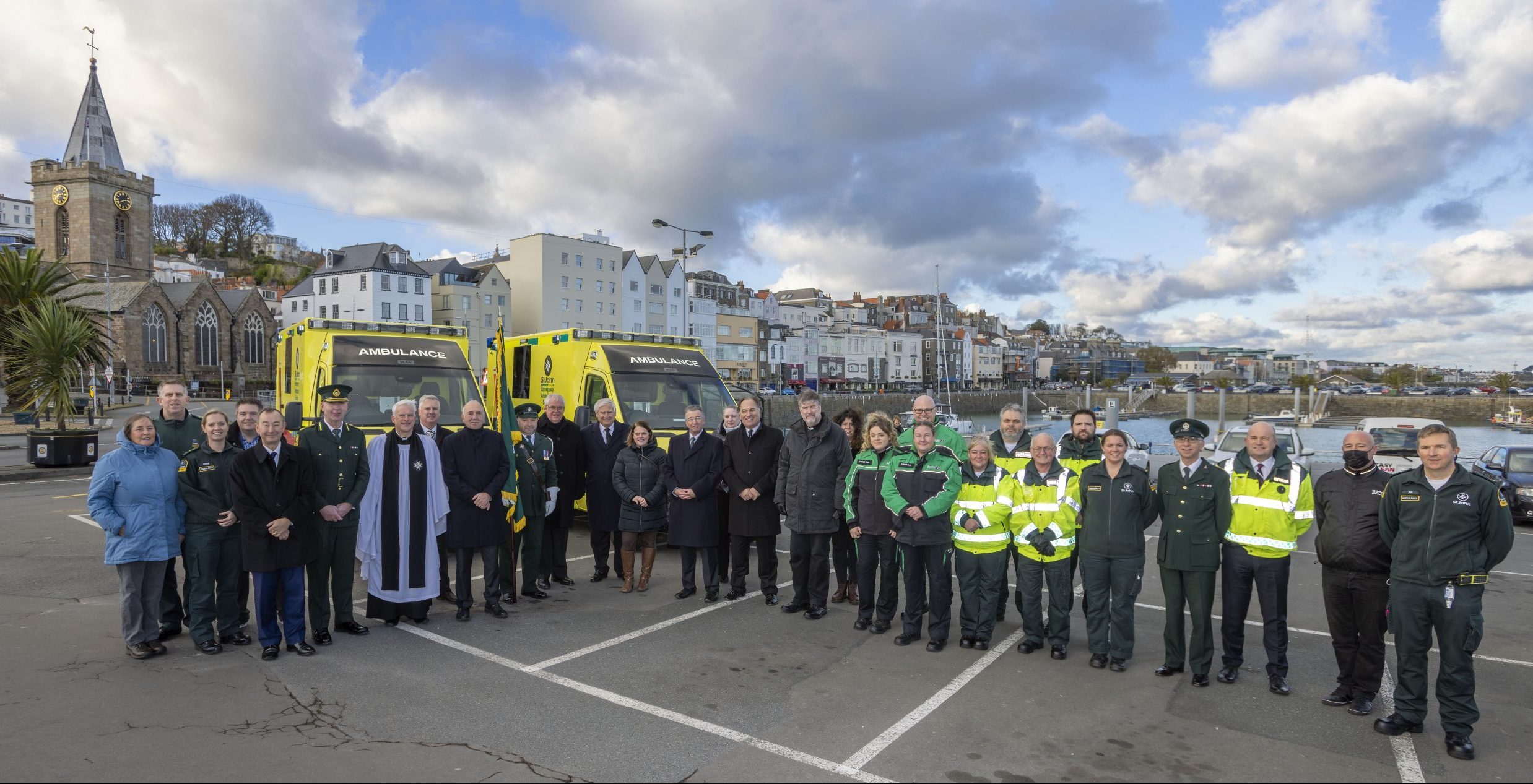 During the Covid pandemic frontline ambulance crews were supported by St John volunteers who took on tasks including the deep cleaning of ambulance vehicles.