Around midday the Flying Christine III was activated for a patient in Sark with a medical condition, requiring transfer to Guernsey. Initial treatment had been started by the Sark doctor and was continued by the paramedics on the passage back to Guernsey.

During the afternoon the St John marine ambulance was deployed to Alderney for a patient requiring transport to Guernsey. On arrival back at St Peter Port harbour the patient was conveyed by waiting road ambulance to the Princess Elizabeth Hospital.

While the Flying Christine was committed on the mission to Alderney, another call came in from the Sark Ambulance Service requesting assistance for an injured patient on Dixcart Bay. The patient needed further assessment and treatment in Guernsey, so the St Peter Port All Weather Lifeboat “Spirit of Guernsey” with two paramedics aboard was tasked to respond to this case.  The paramedics were transferred ashore on the Sark Sea Fisheries RIB and following a handover from the medical team in Sark, the casualty was taken onboard the RNLI lifeboat in a basket stretcher for the return to Guernsey.

Two days earlier the St John Emergency Ambulance Service had been called to an incident on Guernsey’s south coast following a 999 call after a person sustained injuries following a fall on rocks.

A double crewed ambulance and an Incident Officer were dispatched and made their way by foot from the nearest carpark, via the cliff path and ladder, to the beach. A Senior Ambulance Officer was also deployed to assist with the management of the case.

On arrival clinicians assessed the patient and provided immediate care, but due to the difficult access and remote location of the incident the Ambulance Officer requested assistance from the RNLI to help with a swift and safe extrication. The patient was transferred using a basket stretcher to the Inshore Lifeboat and then onto the All Weather Lifeboat before being conveyed to St Peter Port.

A paramedic provided continuity of care and travelled with the casualty on the lifeboat back to St Peter Port harbour and onto the Emergency Department.

All agencies involved worked well together to ensure the best care for the patient and a successful outcome for this emergency. 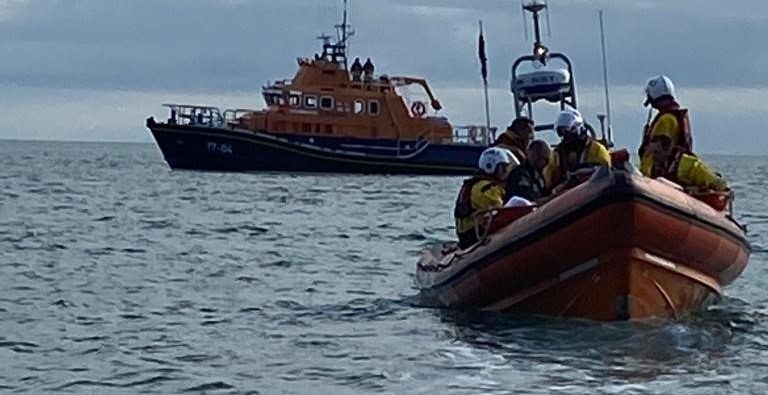 The Emergency Ambulance Service would like to thank the volunteers of the St Peter Port lifeboat and the members of the public who assisted in these incidents.

The Flying Christine III is provided by the St John Ambulance Guernsey charity and is funded by donations, sponsorship, charges and subscriptions. The vessel is operated by the Emergency Ambulance Service and is staffed by professional clinicians and a volunteer boat crew.